After a sickness of eight weeks, "Kitty" as she was called, died while with her family on their European trip. Her father returned for the funeral held at 87 Elm Street, Hartford, the home of Charles W. Johnson, brother of Emily Merrill Johnson Holcomb. Her middle name is spelled Catharine in the family bible and Catherine in the cemetery. 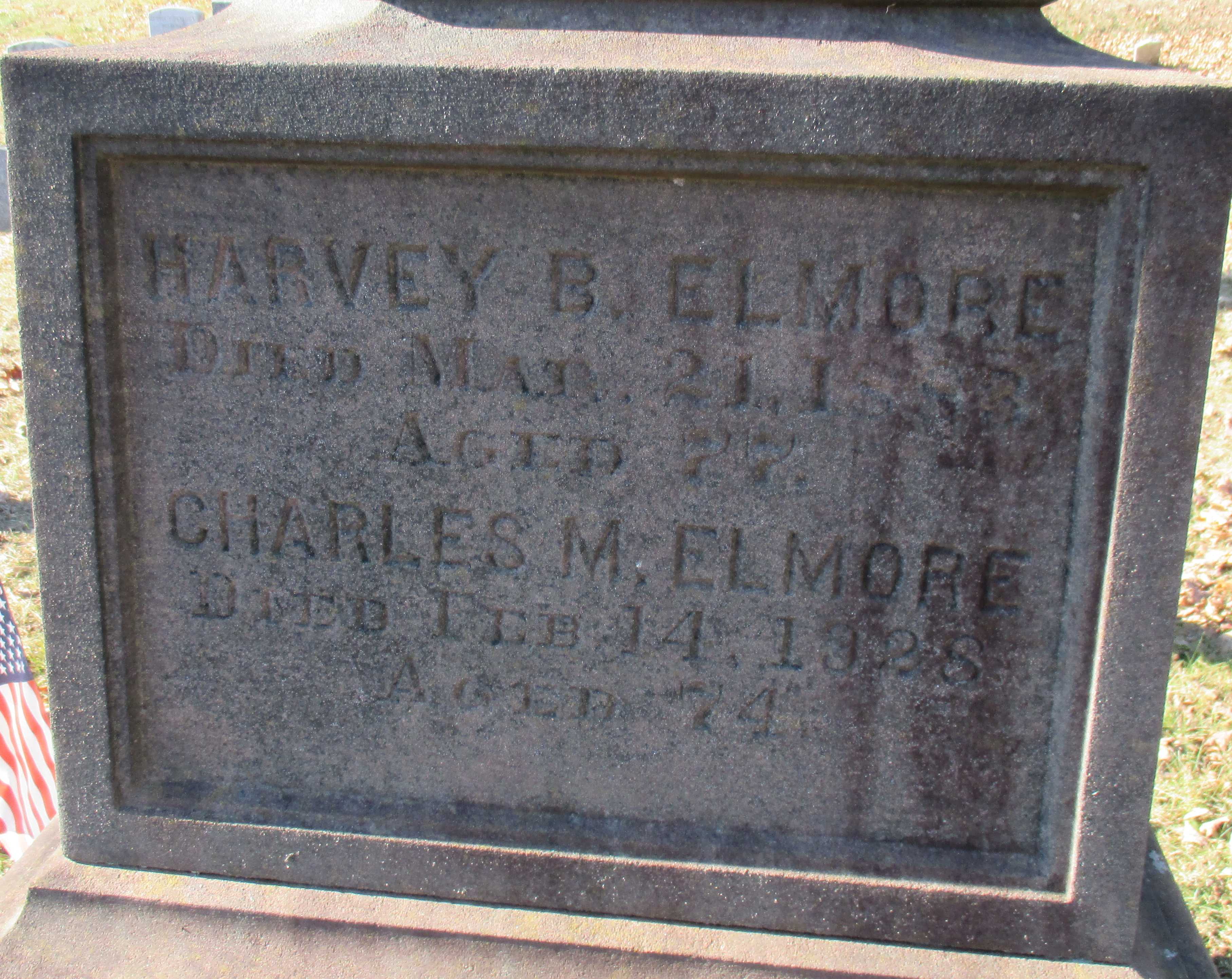 Mr Harvey B. Elmore, who died at his home near Winsetd March 21, was born in Cambridge, Vermont in 1806. In 1824 he came to New Hartford, and in compnay with Mr. Tertius Wadsworth, built a store at Nepaug and carried on business there for two years, when they sold out the concern to Mr. James F. Henderson. Subsequently, at two different times, Mr. Elmore was engaged in mercantile business at North Village, as a member of the firms of Brown, Joens & Elmore, and Elmore & Priest & Co. In 1854 he formed a partnership with J. H. Welch in the drug business in Winsted, from which he retired in 1866.

In 1831 he married Nancy, daughter of Phinehas Holcomb (Jr.) of New Hartford by whom he had three children - two daughters died in childhood, and a son, Edwinharvey, was killed at Antietam, aged 26. His first wife died in 1846, and in 1851 he married Mrs. Harriet Mallory Hubbard, by whom he had one son, Charles Mallory Elmore, who survives him and who was his devoted nurse. Mrs. Elmore died in 1858., Mr. Elmore's health had been declining for several months, but his last illness was about three months duration, during which his mental facilities became impaired, and he was a great sufferer.

Harvey Edwin Elmore (sometimes known as Edwin Harvey) was killed at the battle of Antietam, Maryland; he was in Company C as was hi Uncle, Hubert F. Holcomb. I have been searching to ascertain for sure the place of his burial ever since 1973; in the May 26 edition of the New Hartford Tribune; "Graves of soldiers in the different cemetery in New Hartford: North Village Cemetery - First Sargeant Edwin Harvey Elmore, Co. C, 8th Conn. vols. Killed at Antietam, Sept 17, 1862." Does this statement prove beyond a doubt that the U.S. marker is a gravestone rather than a cenotaph? The Civil War memorial monument lists: 8th Conn. Infantry: Harvey E. Elmore and Hubert F. Holcomb. Harvey Edwin Elmore was born on 22 February 1836 at New Hartford, Litchfield Co., CT. He was the son of Harvey Bates Elmore and Nancy Smith Holcombe. Harvey Edwin Elmore died on 17 September 1862 at Antietam, MD, at age 26.

Meron r. Holcomb, 60, of 16 Allen Place died at the Hartford Hospital, Friday. Mr. Holcomb was manager of the production department of the Royal Typewriter Company and had been connected with the company for the past 12 years. He leaves one brother, Charles Holcombe of Bridgeport. The funeral will be held Monday at 2 p.m., with services at the Quinnipiac Chapel, Plantsville. Rev. George H. Gardner, pastor of the Plantsville Baptist Church will officiate. Burial will be in the Quinnipiac Cemetery, Plantsville.

Merton's will, recorded in Volume 122 at page 214 of the Hartford Probate Court, states he is "of Hartford", directs his executor to bury him "beside my first wife in Quinnipiac Cemetery, Southington"; gives $5,000 to Mae G. O'Loughlin Fallone, 1041 Capitol Avenue, Hartford for her help in his business, $5,000 to Florence N. Graves, 433 Albany Avenue, Hartford for her services as a nurse. All the rest both personal and real estate divided into two equal parts: one part to Annie Cowles Turner, sister of his first wife......both of Plantsville. If Annie Turner should not survive, her share goes to O'Laughlin and Graves equally. If Harriet Camp does not survive, one part goes to her son Rudolph Camp, the other part ot O'Loughlin and Graves. The last paragraph states, "I make no provision for my wife Caroline Holcomb for the reason that she deserted me and my home in 1911 and her whereabouts is unknown to me." The will is dated September 12, 1930 and names the City Bank, Hartford as executor.

Later Caroline appeared, contested the will and the $150 per month which the court awarded her; she finally settled for a lump sum of $3,000. Her address was 1445 South Salina Street, Apt. 16, Syracuse, New York.

Merton probably had no children.

In 1891 and 1892, a Merton Holcombe was recorded in the city directories of Rockville, CT as a paymaster at W. Wollen Co., boarding at 44 East Main St. 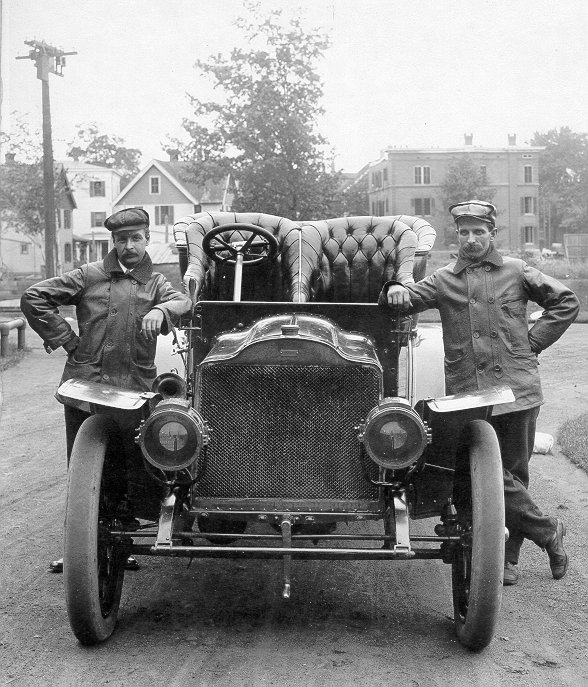 There were no children mentioned in his will, there were probably none or at least no surviving children.

Burton and Edna were eumerated in the 1900 Hartford, Hartford Co., CT, federal census in the household of George Fuller. He was an electrician, age 29 ; she was 29. There were no children in the household.

Burton Beckwith Holcomb of this city, the well-known automobile driver, died yesterday at Southern Pines, N.C. aged 37 years. He was in poor health for six months and but little hope was entertained of his recovery. Mr. Holcomb was stricken with an attack of pleurisy and a general breaking down in March and physicians advised him to go South as it was though that the climate there would benefit him. He returned to this city in August to attend to some business but after staying a week here his health failed so rapidly that he was hurried back to Southern Pines, his wife accompanying him. Mr. Holcomb's home was at No. 37 Madison street. Relatives of Mr. Holcomb in this city were notifeid of his death yesterday morning. No arrangements were made for the funeral.

Burt Holcomb drove testing cars for the Electric Vehicle Company for a number of years and he came into prominence when he established the first road record between Chicago and New York in a Columbia car. When his record was broken, he went after it again and mede the distance in 36 hours and 38 minutes. Since then, the record has been lowered by other drivers. He was a very skillful driver and in addition to holding the Chicago and New York record twice he performed a number of other notable driving feats nearer home.

The engine in the car that Holcomb drove when he made the Chicago and New York record was known as the "Old Betsy."

b. 22 March 1879
Died before the filing of the birth certificate. daughter Holcombe was born on 22 March 1879 at Bloomfield, Hartford Co., CT. She was the daughter of James R. Holcombe and Phoebe M. Gladwin.

Robert registered for the draft while living at 2 Holcomb St., Hartford, Hartford Co., CT, and listed no place of employment. He listed Edward Barry of Main St., Hartford as his primary contact.

b. 21 January 1867, d. 1918
Burton may have married April 12, 1898 Grace Ethel Palmer. He was probably divorced and may have re-married. He had no children. He was burned to death in a studio in New Rochelle, New York. He had an office at Torrington where he sold music and dealt in photographic supplies and he had gone to New Rochelle to take temporary charge of a studio there. Burton Clark Holcombe was born on 21 January 1867. He was the son of Herman Avery Holcombe and Josephine Elvira Dutton. Burton Clark Holcombe died in 1918 at Burned, New Rochelle, NY.

Widower Louis was enumerated in the 1940 Simsbury, Hartford Co., CT, federal census, in the household of daughter Alma Brown, wife of Alvin Brown. Also in the household were Isabelle and John Holcomb, Louis' children.

Fred was listed in the 1900 Granby census, page 12B, line 96, as a barber, with wife Milly and daughter Winifred.

Fred M. and Nellie were enumerated in the 1930 Simsbury, Hartford Co., CT, federal census, district 208. He was an agent for Culbro Brothers Tobacco. Children in the household were Harold R. 29, Fred 19, and Whitney, 16.