Mary Bissell was born at England. She was the daughter of Capt. John Bissell and Mary Drake. Mary Bissell married Jacob Drake, son of John Drake and Elizabeth Rogers, on 12 April 1649 at Windsor, Hartford Co., CT.

d. after 1681
Moved to Simsbury 1667-9; left there after the burning of the town by Indians, 1676; was afterwards employed in surveying Ellington, where he settled. The Hon. Judge Benjuamin Pinney of Ellington, in a latter dated 24 May 1850, says: "We can show you the homestead where Samuel Pinney built his log-house; and I feel proud in saying that the land bought by him from the Indians is now in the hands of my son William, and two half brothers nelson and Andrew Pinney, and it has never been in other hands than the Pinneys. It is the only tract of land in this town which has nover been conveyed by deed from the family descendants. Of this tract no deed can be found but the Indian title to Samjuel Pinney." Samuel Pinney was born at Dorchester, Suffolk Co., MA. He was the son of Humphrey Pinney and Mary Hull. Samuel Pinney married Joyce Bissell, daughter of Capt. John Bissell and Mary Drake, on 17 November 1665 at Windsor, Hartford Co., CT.2 Samuel Pinney died after 1681 at Ellerton, CT.

Richard Porter was born on 24 March 1658. He was the son of Daniel Porter and Mary (?) Richard Porter married Ruth Holcombe, daughter of Joshua Holcombe and Ruth Sherwood, circa 1685/86.1 Richard Porter died in 1739 at Alexandria, LA.

Richard was given 40 acres of land, part of a farm lying in Wallingford and abutting Farmington, by his father "bonesetter" Daniel Porter.

There was a Richard Porter, son of Arthur, in County Somerset during the reign of Henry VIII. Somerset county is where Bowman believes Thomas Holcombe lived just prior to his emigration to America.

"The family of Phinehas, Jr. lived almost at the top of West Hill on the opposite side of the road from his father. The dwelling was built by Phinehas, Jr. in 1809-10. It was subsequently owned by a Mr. Rowley, then by John Roberts of Litchfield, who was the father-in-law of Friend Holcomb. Then Friend's son Hubert occupied the dwelling. Phinehas, Jr. must have been a farmer, either on his own or working with his father. Phinehas, Jr. died suddenly in West Granby of the "fever" , as recorded in the sexton's book of burials. unfortunately we know nothing more about him."


Truman and Seba settled first at LeRoy; after a residence of a few years there, they moved to Ulster and settled permanently upon a portion of the farm of his father, the Eli Holcomb homestead.


The Pioneer and Patriot Families book seems to indicate that they were married in 1812 without giving a specific date.


In 1800, Truman Holcomb, a brother to Hugh and Sterling, came from Ulster and moved into a house on the A. G. Kelley farm, occupied by William Cole and Joel Bodwell, and Isaac Wooster located on the same farm farther north. Truman Holcomb took up a farm close by and remained on it twelve years, then returned to Ulster. He was the father of sixteen children, eight by his first wife and eight by his second. His son Eli, who is now eight-four years of age, still lives in the township a little to the south of the village, where he settled in 1819. He has a family of thirteen children, nearly all of whom are the heads of families. He has succeeded well as a cooper, hunter, miller, and farmer.

Truman was enumerated in the 1840 Ulster, Bradford Co., PA, federal census. Other family members were enumerated nearby. There were two very young girls in the household.


Deacon Seeley Crofut started the first Sunday-school in an old log school house, opposite the present residence of S. B. Morse. He was elected justice of the peace in 1812. He served in many positions of trust, by the choice of his neighbors. He kept the first grocery or store in the township. The Baptist meetings were for many years held at his house.

Sterling is recorded in the 1840 census of LeRoy, Bradford Co., PA, with 3 males and 3 females in the household.

Hugh moved with his father to Ulster, PA, about 1786 or 1806, later locating at LeRoy, then a wilderness and located lands for their future home, then fourteen miles from any habitation, his lands extendng from the village of LeRoy to the top of the first hill on the road to Canton; his brother's lands adjoining and extending on his road to the top of the second hill. Soon after location they brought in their sister, Mrs. Crofut, and her husband. For a few years she did washing and baking while they kept bachelor's hall.

He built the first saw mill and grist mill in that section of the country. Both Hugh and Sterling cleared up large farms which they carved out of a rugged wilderness and upon which their lives were spent.

Hugh was recorded in the 1840 census of LeRoy, Bradford Co., PA, with a household of 2 males and 2 females.

Alpheus Holcomb, a brother of Hugh and Sterling, settled on the flats at the north of the mill-pond at the Centre, where he built a house and set an orchard of apple-trees. Having a roving nature, he soon sold his farm, and went westward. After a few years he returned, and settled on the Robert McKee farm. He was deacon in the Baptist church, and was for many years considered one of the leading lights.


Alpheus was recorded in the 1840 census of LeRoy, Bradford Co., PA, with his wife and one other female in the household.

Jared and Hannah had no children. Jared and the widow McCarty apparently had at least two children.

Jared was enumerated in the 1840 Ulster, Bradford Co., PA federal census. There were 3 males and 3 females in the family. 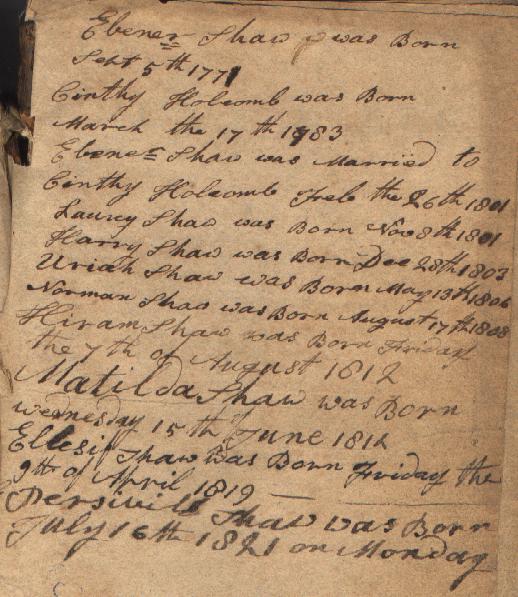 Ebenezer was enumerated in the 1820 Ulster, Bradford Co., PA, federal census. There were six males and four females in the household.

Hiram is recorded in the 1840 census of LeRoy, Bradford Co., PA with 1 male and 5 females in the household.

After their marriage, Harry adn Tryphena must have remained in Bradford Co., PA, until about 1844. During that time their first five children were born. It is reported that they lived in Union co., OH, for five years. Their sixth child is said to have been born at Columbus, OH, in 1848. By the 1850 census they were counted in Cass Co., IN. When their last child was born in 1852, they were in LaSalle Co., IL. As they continued to move westward they lived at Ottawa, IL, Jackson Co., IA, and at Dubuque, IA, where they were recorded in teh Iowas 1856 census with all seven of their children. Soon after this the children began to go their separate ways. By 1860 Harry and Tryphena had made their last move. They had settled at Hopkinton, in Delaware Co., IA, with only the three youngest children still at home. Harry's occupations included farmer, teamster, tanne, currier and shoemaker. In 1870 Tryphena's mother, Parney (Hill) Lawless Smith was living with them and Darwin was the only child at home. Harry and Tryphena died at Hopkinton whre they are buried in the town cemetery.2

Additional information on Horace is from the Family Search Ancestral File, AFN: 4ZJB-MF. The information was posted by Vera Dillin Combs and Lynette Combs Young of North Platte, NE.

Another source is Neil McDonell, adam1984@yahoo.com.

The information and documentation provided by the above researchers confilcts with McPherson. McPherson shows Horace's wife to be Electa Bailey. 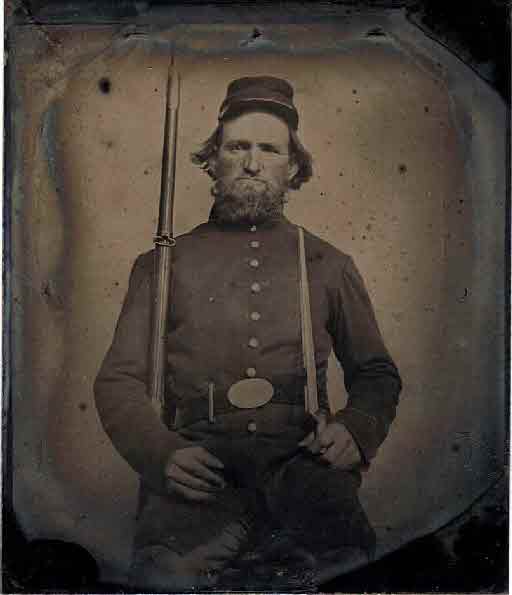 Information on Chester Holcombe and his descendants provided by Wade Gladstone Holcombe.

Chester served as a Unon soldier, mustered October 11, 1861 in co. F. 4th Minn Vo. Inf Regt; discharged for disability, June 16, 1863; moved from PA to the west as a young man; became blind and lived to a very advanced age.

Mr. Holcomb moved west in 1857, and settled in Nunda, Freeborn county, in 1858, and moved to the present home in Gordonsville, in 1870. He was a man widely known and highly respected by all, given to hospitality almost to a fault. Never better satisfied then when surrounded by a host of friends and neighbors, and never allowing friend or stranger to go away hungry. He was converted and baptized in the Methodist church in 1860. He died peacefully in the full assurance of a Christian Faith, and of the forgiveness and acceptance of his Heavenly Father. He enlisted in Co. F. of the 4th Minnesota Volunteers, Oct. 11, 1861, serving 20 months, where he contracted the disease of which he died, he having been an invalid for the last twenty years.

The last sad rites were attended by one of the largest concourses of relatives and friends ever seen in this vicinity, many coming long distances to attend the funeral. The remains were Interred in the State Line Cemetery.

There are two Martha's at nearly the same dates that cause some confusion. Bowman explores it completely so she is quoted here.

Martha Holcomb, born in 1682, had an heir mentioned in her father's 1740 will. McCraken, in TAG Vol 57 #2, states she married Daniel Hayes in 1716. McCraken reasons that since the will left 20 shilings to Martha's son to buy him a bible that the heir is a minor in 1740. The only Daniel Hayes in records in nearly 25 years old. There is another Martha, born 1706, and listed in Windsor records. Thus Martha's heir could be someone else. Martha was probably dead in 1744 when her sister, Mary, left her estate to her other four sisters. Or, the possibility exists that Nathaniel was referring to one of his other daughters, perhaps Margaret North rather than Martha. A Renee Cossitt, born in 1722-1810, son of Rene and Ruth Porter Cossitt, married Phebe Hillyer, Martha Holcomb, and Martha Barber. He moved to Cape Breton Island, Canada. She is not this Martha Holcomb because Phebe Hillyer Cossit died in 1786, and this Martha would already be dead. Certainly Martha who maried Daniel Hayes belongs in the Holcomb genealogy her exact place can not at this time be proven, so she is listed here. Some confusion in this family was caused by the other Martha's. One of these Martha's died early having only one child. One Martha married Dr. Jonathan Buttolph in 1723. In the book Commemorative and Biographical Record of Hartford County is mention that the Martha who married Jonathan Buttolph was a daughter of Nathaniel (born June 11, 1673). From, New England Genealogies by Reverend Charles W. Hayes, A.M. of Westfield, N.Y; Daniel Hayes, born in 1686, the second child of George Hayes married Martha Holcomb in March 1716. She died in January 1717, and he married Sarah Lee in May 1721. She died in 1738, probably the daughter of John Lee. Daniel married in 1739 the Mary in his will.

Richard Birge came to the Colonies on the MARY AND JOHN and later founded Windsor, CT.

Information on Richard Birge and his descendants is primarily from Ernest Crichton Birge, 1860 Big Crane Loop, Port Orange, FL 32124-2525; (904) 760-4229; ebirge@aol.com. He found a birth record for a Richard Birge on 23 ovember 1620 at Ormskirk, Lancashire, England, but if this was teh immigrant he would have been only 21 when he married Elizabeth Gaylord, the eldest and only daughter of his deacon. The 1611 birth record found at Aaswick, somerset is a more plausible match, both in date and location.2