Child of Caleb Case and Charlotte (?) 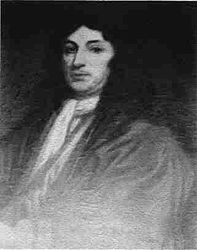 
Thomas, a civil leader of early New England, was baptized on 12 October 1576 at Yardley Hastings, near Northampton, England; the exact date and place of his birth are not known. His father, Captain Roger Dudley, was killed in military service, though the details do not survive. Dudley's mother (name unknown) also died when he was young. Family and friends saw to his upbringing, enabling him to attend a Latin grammar school, securing his placement as a page in the household of the earl of Northampton, and obtaining for him a position as clerk to a Judge Nicolls. Along with other Northampton youth Dudley volunteered to fight for the Protestant champion Henry of Navarre in the French Wars of Religion. The Englishmen saw no action, however, and returned home. In 1603 he married Dorothy Yorke of Northampton; they had six children.

At some point Dudley had become committed to reform of the church and developed contacts with fellow Puritans. Lord Say and Sele recommended him to the earl of Lincoln, who needed a steward.
Dudley performed well in the post, serving for nine years, and through rigorous management cleared the estate of debts and righted its finances. In the process Dudley himself prospered. He was able to send two of his sons to Emmanuel College, Cambridge, and to retire and move to Boston, in Lincolnshire, England, where he became part of the parish of St. Botolph's with John Cotton as his pastor.

After a few years he returned to the service of the earl of Lincoln at the latter's request. In 1626, when Lincoln considered leading troops to join the Protestant forces in the Thirty Years War, he asked Dudley for advice. Dudley discussed the matter with the Reverend John Preston, a Puritan leader and master of Emmanuel College. A strong supporter of international Protestantism, Preston also had highly placed friends at court. Dudley advised Lincoln against the enterprise.

Among Dudley's friends were leaders of the New England Company, reorganized in 1629 as the Massachusetts Bay Company. Following Dudley's decision to emigrate, he was chosen as deputy governor of the new colony and departed with Governor John Winthrop on the Arbella in April 1630. Residing first in Charlestown, he settled in Newtown (later Cambridge) when that location was designated as the future capital of the colony. When Winthrop changed his mind and settled in Boston, Dudley was aggrieved but remained in Newtown. He later supported the petition of other Newtown inhabitants to leave the bay and migrate to the Connecticut River to settle Hartford.

Dudley was a devout Puritan and one of the founding members of the church in Charlestown when it was established in July 1630. In Newtown he continued to be active in the local congregation.
He used his public office as well to defend orthodoxy. He was noted for his opposition to the views of Roger Williams, Samuel Gorton, and Anne Hutchinson, and he was a member of the committee chosen to defend the colony against the charges of Robert Child that the colony denied legal appeals to England. Despite his reputation for rigidity he took the more moderate stance in the dispute precipitated when John Endecott cut the cross from the English ensign at Salem in 1634. Dudley sided with Thomas Hooker and against Cotton and Winthrop in arguing that use of the cross for such purposes did not constitute idolatry.

Dudley became one of the key figures in the shaping of the colonial political order, serving thirteen times as deputy governor and elected as governor in 1634, 1640, 1645, and 1650. As a former governor, Dudley was one of those chosen for the short-lived Standing Council in 1636. He was one of the original two commissioners chosen to represent Massachusetts in the New England Confederation on its establishment in 1643. He was a member of the committee to establish a colonial college, then served as one of the overseers of Harvard from 1637 until his death, and was one of the signers of the Harvard Charter of 1650.

His training as an estate steward perhaps accounts for Dudley's precision and dedication to the exact interpretation of the law. His approach generated friction with Winthrop, who believed in greater discretionary latitude for magistrates. The two clashed in 1632 when Dudley forced Winthrop to acknowledge that the colony's charter was the source of all authority in the colony. This led to citizen demands to see the charter and the so-called "Revolution of 1634," when the assistants, the council of magistrates, agreed to share legislative power with deputies of the freemen and when Dudley was first chosen governor. Disagreements between Winthrop and Dudley continued to ruffle the political scene, with Dudley standing for more rigorous application of the law and Winthrop for more leniency. In 1636 Henry Vane brought the two together in a meeting with ministers and other magistrates to resolve their differences. Winthrop deferred to the group's view that Dudley's strictness was more appropriate to the colony's condition. The breach was gradually healed, aided by the marriage of Dudley's son Samuel to Winthrop's daughter Mary. This was but one of a number of marriages that cemented Dudley's place in the colony's elite, including the marriage of his daughter Anne to Simon Bradstreet.

Dudley married Katherine Deighton Hagborne, within a year of the death of his first wife in 1643. There were three children of this marriage. His son Joseph Dudley eventually would become governor of Massachusetts under its new charter of 1692. His most talented child was the poet Anne Dudley Bradstreet, who wrote of him that he had "spent his state, his strength, and years with care / That after comers in them might share." That judgment accords with the views of most of his fellow colonists, who were more impressed with his dedication than warmed by his personality. 2